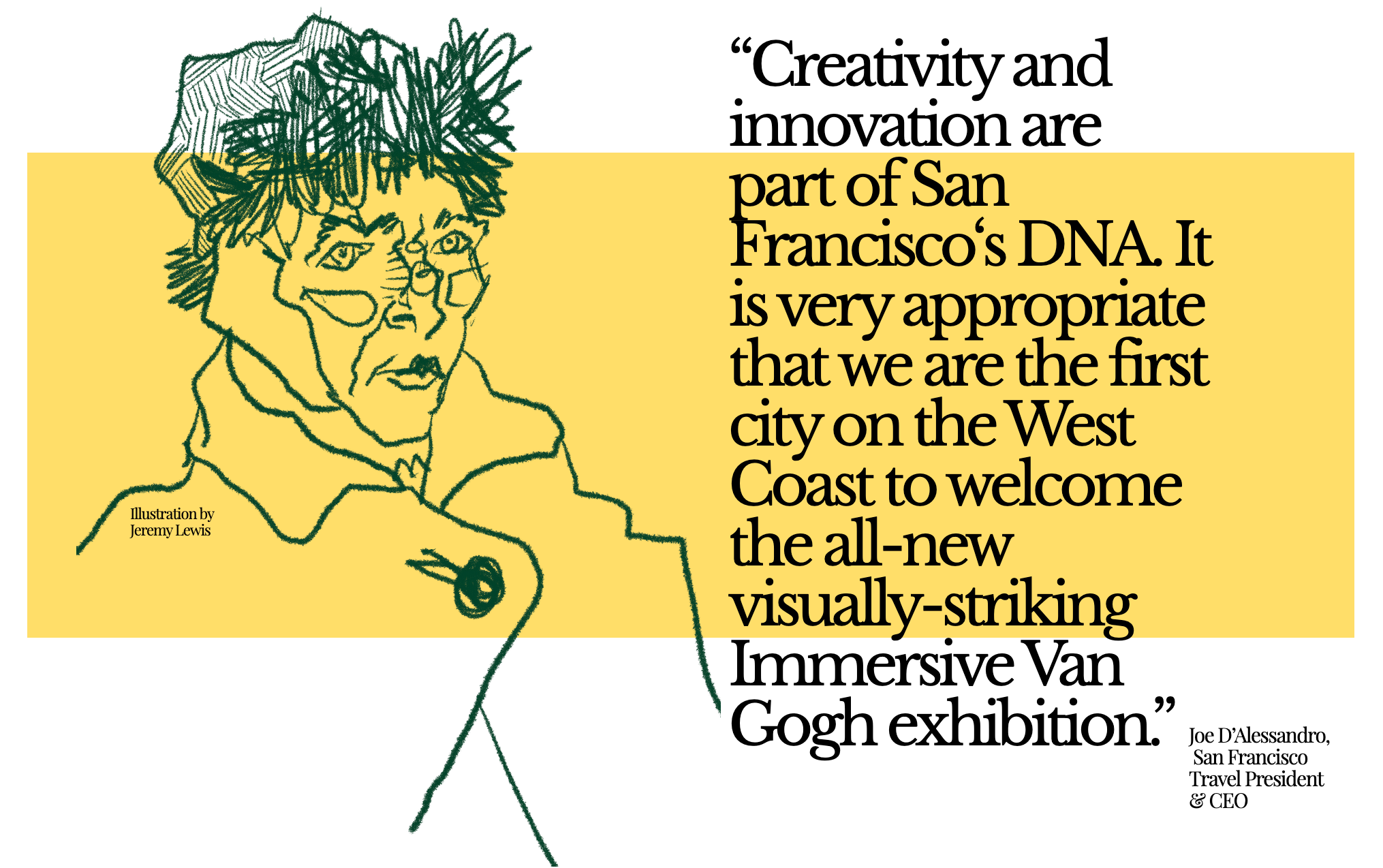 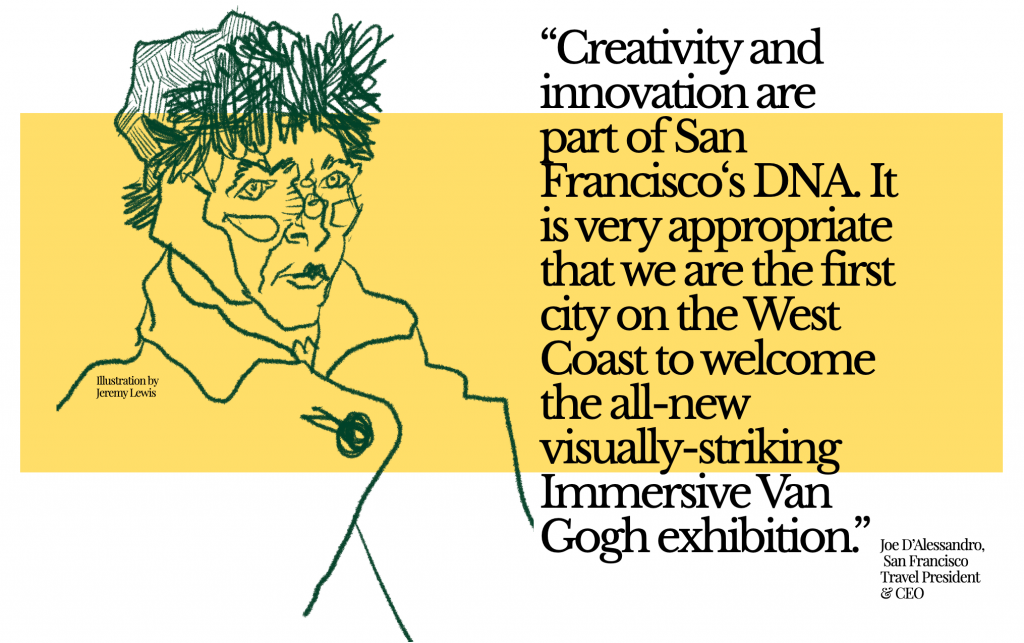 Amid power outages, fires, a heatwave, and with a cross-national Stop Asian Hate protest right outside the venue, the Immersive Van Gogh exhibit weathered its first weekend on the West Coast as well as any native San Franciscan. After months of tantalizing posters featuring the artist’s self-portrait against a backdrop of city landmarks, the ribbon was cut and doors opened to the public last Thursday. With the Chicago installation currently sold out until mid-June, more than 120,000 tickets have already been purchased for the new ‘Fran Gogh’ experience—now extended into September to accommodate the highest presales yet for the travelling show. Since even the largest HD TVs tend to underwhelm after a year in lockdown, thousands of Bay Area art-lovers are clearly jonesing for a more impactful way to experience media.

As it has in Paris, Toronto, and Chicago so far, the Van Gogh exhibit adapts itself to each venue it’s transplanted into by taking on characteristics of these historic spaces. Custom-designed to SVN West—formerly home to the Fillmore West and Carousel Ballroom where legends like Aretha Franklin, Miles Davis, Fleetwood Mac, Elton John, B.B. King and the Grateful Dead have played—120 visitors per showing will have 100,000 square feet to socially distance in. Along with 500,000 cubic feet of projection space to experience the immersive exhibit as if from a seafloor fifty feet underwater. Similar to previous installations, the SF installation also features a mirrored, one-story platform where visitors can vary their perspective on the projections.

Conceived and designed by Massimiliano Siccardi, the exhibit boasts high-definition brushstrokes and vibrant colours rendered by art director Vittorio Guidotti. Simultaneously, audiences will be drenched in a saturated surround-soundscape curated and composed by Luca Longobardi. Visitors can expect their cavernous collaboration to play the hits: Starry Night, Sunflowers, and The Potato Eaters, while featuring many of Van Gogh’s more obscure drawings and daubings in collages that traverse the space in layered landscapes. Musical selections ranging from Edith Piaf to Mussorgsky colour the vivid paintings even more brightly, but many of his original compositions are as detailed, tense, and exacting as the famously self-critical painter himself. The thick, plush sound design is as palpable a dimension as each of the four walls, evoking the turmoil of Van Gogh’s struggle with mental illness.

The team behind the exhibit has a thorough understanding of why this experience has expanded from city to city, coast to coast, at a time when so many other cultural spaces have had to reduce or cancel their programming entirely. Produced by Show One Productions and Starvox Exhibit, the collaboration of three Italian creatives under Lighthouse Immersive allows strangers who have been sheltering in place to experience a majestic, humbling artistic experience safely together. Even from their generously spaced individual rings of light on the floor, one of the most underrated parts of the experience is to see other people—real human beings from beyond their household—silhouetted against the deep blues and sunlit ambers from across a space the size of a football field.

With the city cautiously loosening COVID-19 restrictions and people of all ages now eligible for vaccination, San Francisco Travel President & CEO, Joe D’Alessandro says this is the perfect time for the exhibit to come to the city. “Creativity and innovation are part of San Francisco‘s DNA,” he declares. “It is very appropriate that we are the first city on the West Coast to welcome the all-new visually-striking Immersive Van Gogh exhibition.” And despite a massive fire in the Bay Area prompting a number of PG&E power outages that affected the newly minted exhibit’s first weekend, many visitors left glowing compliments for the Box Office team’s polite efficiency in rescheduling hundreds of tickets in light of the blackout.

Publicist Kevin Kopjack remembers when Lighthouse Immersive co-founder Corey Ross approached him with the ‘crazy idea’ to bring the Van Gogh exhibit to San Francisco following their work on the Banksy exhibition. According to him, the company is “reinventing what art is. It’s not just standing in a museum looking at the Mona Lisa; it’s getting people involved and expanding what art can be.” He also points out that a multimedia installation using cutting-edge projection mapping tech and a range of modern and classical music to guide the show’s emotional arc is “a perfect stepping stone for people who may not be too familiar with fine art”, accessing demographics that might never find themselves in a museum—but who may become more interested following the 38 minute experience. 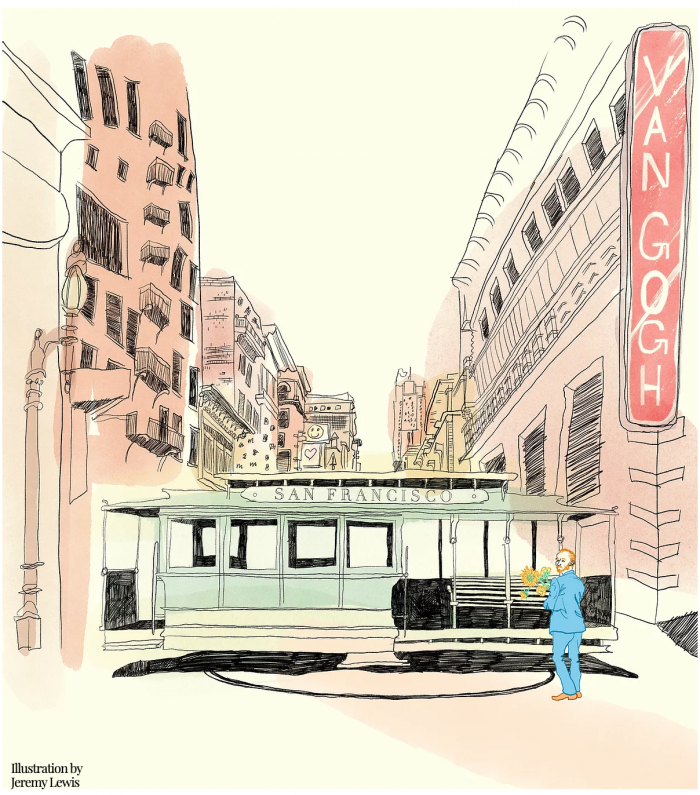 Art that moves: Van Gogh’s journey to Vincent, in a nutshell

6 amazing experiences you can gift in San Francisco